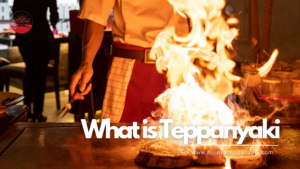 The genesis of the word teppanyaki:  The word Teppanyaki is derived from the Japanese words, “teppan ” which means metal plate, and “yaki” which means grilled, fried, and pan-fried. Teppanyaki style cooking means grilling or frying the food on an iron plate.

Teppanyaki was started by local steak houses in Japan about 200 years ago. Noteworthy skills of teppanyaki chefs,  like tossing the food, and making an onion volcano to flame are startling to watch. The process of cooking teppanyaki food is a great culinary scene to watch. Various cuisines are cooked on teppanyaki like shrimp, chicken, beef, vegetables, and fried noodles.

The  Inception of  Teppanyaki-Style cooking in Kobe

The journey of teppanyaki food making started in a Restaurant named Misono, which was opened in Kobe, in 1945. The restaurant started this staggering idea of cooking food in front of their clients, thus presenting this food-making process as performance art.

Skilled chefs deliberately manoeuvred their knives in a particular way,  during food making, this attracted the foreigners that were visiting Japan. Increased popularity brought more revenue and more visitors to the restaurant. So, chefs introduced new tricks to attract their clients like flipping and tossing ingredients during cooking and stacking up onions to flame them like a volcano, this created a great increase in the number of visitors.

Teppanyaki’s Voyage  the  to the United States

The first restaurant in the United States that started teppanyaki-style cooking was named Benihana. In 1964 Americans started to enjoy teppanyaki food performances and it got famous throughout the country. Different restaurants named “Japanese steakhouses “ were started in America that used teppanyaki cooking styles.

In a traditional style of Japanese teppanyaki, the ingredients used are yakisoba, cabbage, and sliced meat. Teppanyaki cooking in western-style mostly uses beef, scallops, chicken, shrimp, lobster, and vegetables. Soybean oil is used to cook them.

How the teppanyaki cooking style is Distinctive?

Guests are seated around a large teppan grill. A beautiful ambience is created for the guests to enjoy the aroma and view of the teppanyaki food. The performance has majorly 3 steps ;

1. Flipping and Drumming of  cooking tools

Chefs start flipping and tossing different tools used in cooking like knives, forks, and spatula. The drumming with the tools makes this a proper entertainment show.

2. Chopping and dicing of ingredients

The chefs present an alluring show of ingredients like meat and vegetables by beautifully cutting and dicing them. other techniques shown by chefs are throwing an egg in the air and using a spatula to break it. You may see a chef catching a shrimp in his pocket, during teppanyaki-style of cooking.

Flamming the teppan grill and starting cooking the ingredients by tossing them in different ways is a visually delightful, and mouthwatering experience for the guests. During cooking, the chef show tricks like stacking up onions and then flaming them like a volcano. Flipping cooked pieces of shrimp to the client’s mouth is also a great way of interaction between the chef and the visitor of the restaurant.

Are you looking for Teppanyaki Catering in Los Angeles?

Tagged What is Teppanyaki