What does Hibachi mean?

The literal meaning of the word hibachi is “Fire Pot”.Hibachi is a round (usually), metal container on which meat and vegetables are cooked. Beneath hibachi, charcoal or wood is burnt to provide heat for the cooking process. 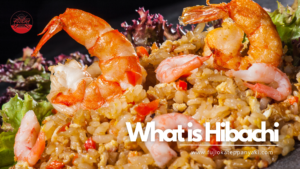 Dating back to the History of Hibachi food

Hibachi is a type of cooking that originated in Japan. It involves grilling meat, seafood, or vegetables on a metal grate. This style of cooking dates back to the seventh century and was initially used for outdoor cooking. This style of cooking is perfect for those who love grilled food. The hibachi grill is a portable cooking tool and provides an easy way to cook food. It’s also a great way to entertain guests.

Hibachi became popular in America in the late 1970s when Japanese steakhouse restaurants began popping up. The simplicity of Hibachi cooking is what makes it so appealing. All you need is a metal grate and a source of heat, fresh ingredients, and a little seasoning and you’re ready to cook.

Different uses of hibachi in the history

Use of Hibachi as a cooking device?

If we dig down to see when hibachis were used as cooking instruments? We find two divisions in arguments, one suggests that the use of the hibachi for cooking started almost 200 years ago, the other suggests that the use of the hibachi as a cooking device started somewhere in the mid-1900s. Keeping in mind both arguments one thing can be established hibachi-style cooking started many years ago and had a great impact on the Japanese cooking style.

The commercial use of hibachi was started by a Japanese restaurant named   Misono, in 1945. The primary objective of using hibachi was to attract the clients because people found it attractive to see their food cooking in front of them on a steaming hibachi.

Showing different skills like knife juggling, and toping food over a hot steaming hibachi attracted people visiting from inside and outside Japan.  Old-style hibachis were quite small in size and the hibachis that are used now are quite big open grills.

Hibachi travels to  America and around the Globe

Cooking Method on a Hibachi  and Different Dishes Cooked on Hibachi

This cooking method presents a beautiful view of cooking food with hot steam which comes beneath a hibachi. The hot steam from wood or charcoal adds a nice aroma to the food enhancing the flavour. Hibachi-style cooking enhances the natural flavour of the food so the seasoning or topping is used in fewer amounts. The cooking mechanism of hibachi-style food is based on a grill and steam which gives it a typical flavour.

Various dishes are cooked on Hibachi girls these include Hibachi fried rice, Grilled meat, Hibachi steak, and hibachi vegetables (mushrooms and Zucchini, etc ). Various toppings are used on a hibachi grill that increases the flavour and aroma of the food these are, soya sauce, vinegar, salt, and pepper.

Are you looking for Hibachi catering in Los Angeles?

Tagged What is Hibachi